New measures to make easier the entrepreneurship in Spain 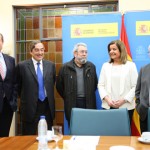 A battery of measures including the reduction of the corporate tax to 15% or reductions of contributions came into force on February 24, 2013 in Spain.

In this article: the new measures that must be put in place by the Spanish government in 2013 are a significant windfall for Spaniards and foreign entrepreneurs who may benefit from even more financial and tax advantages for their business in Spain.

Hereafter the key measures included in the Real Decreto-Ley.

1. Reduction of 100% of contributions for small companies hiring young people with permanent contract

2. A total of 1.3 million companies in Spain

3. Reduction of 100% of the contribution to SMEs that hire unemployed young people with fixed-term contract

5. Reduction of 100% in the price of health insurance contributions for a self-employed under age 30 who hires unemployed people over 45 years of age

6. Young entrepreneurs may benefit from Social Security bonuses for the first 30 months of activity

7. An ambitious project to support entrepreneurs